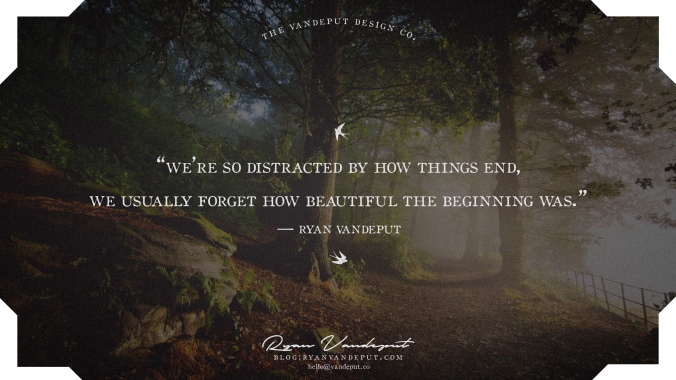 “We’re so distracted by how things end, we usually forget how beautiful the beginning was.” 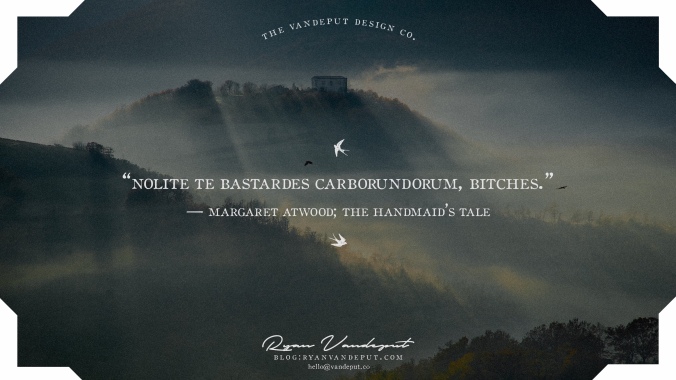 (broken Latin, meaning ‘don’t let the bastards grind you down’)

Many will recognise this quote from Margaret Atwood’s 1985 dystopian novel ‘The Handmaid’s Tale’ (and the subsequent – and epic – Hulu adaptation for the small screen). But where does this ‘fake’ Latin phrase originate? Michael Fontaine, a classics professor from Cornell University; and this blog’s author, Ryan Vandeput, an English Literature Masters Graduate from the University of Leicester, took their best guesses.

“It was likely an old school joke, for those who took Latin class. It’s not really ‘true’ Latin; rather, it sounds like something a school pupil made up for fun. It might even be something Margaret Atwood remembers from her schooling & childhood” surmised Vandeput. Another similar Latin joke phrase with the same supposed translation is “illegitimi non carborundorum,” which Fontaine noted was equally fake—though it’s perhaps a little more legit as Latin, since it at least doesn’t use the made-up “bastardes.”

“Illegitimi is a real Latin word,” Fontaine continues. “It could indeed mean ‘bastards’ (though it’s not the usual word, which is spurius or nothos).”

“My guess is that c. 1890-1900, some American people thought it would be funny to pretend like ‘carborundum’ was actually a Latin word meaning ‘needing to be worn down’ or (making allowances for ignorance, which is surely part of it) ‘to wear down.’ If the phrase was originally illegitimis non carborundum, then the original idea was that ‘there must not be a wearing down (of you) by the bastards,’ or in plain English, ‘don’t let the bastards get you down.’ Either then or soon after, illegitimis would have become illegitimi, which changes the grammar, but most English speakers can’t tell because our grammar doesn’t work that way. That would pretty quickly give you illegitimi non carborundum”

“The key to the mystery is knowing that carborundum was a trade name (for an abrasive scrubbing powder used for cleaning),” he continued. “Whatever it was, it’s not in use any more, so we’ve lost all memory of it. Nowadays it just looks like a strange, broken Latin word to us,” Fontaine concluded. 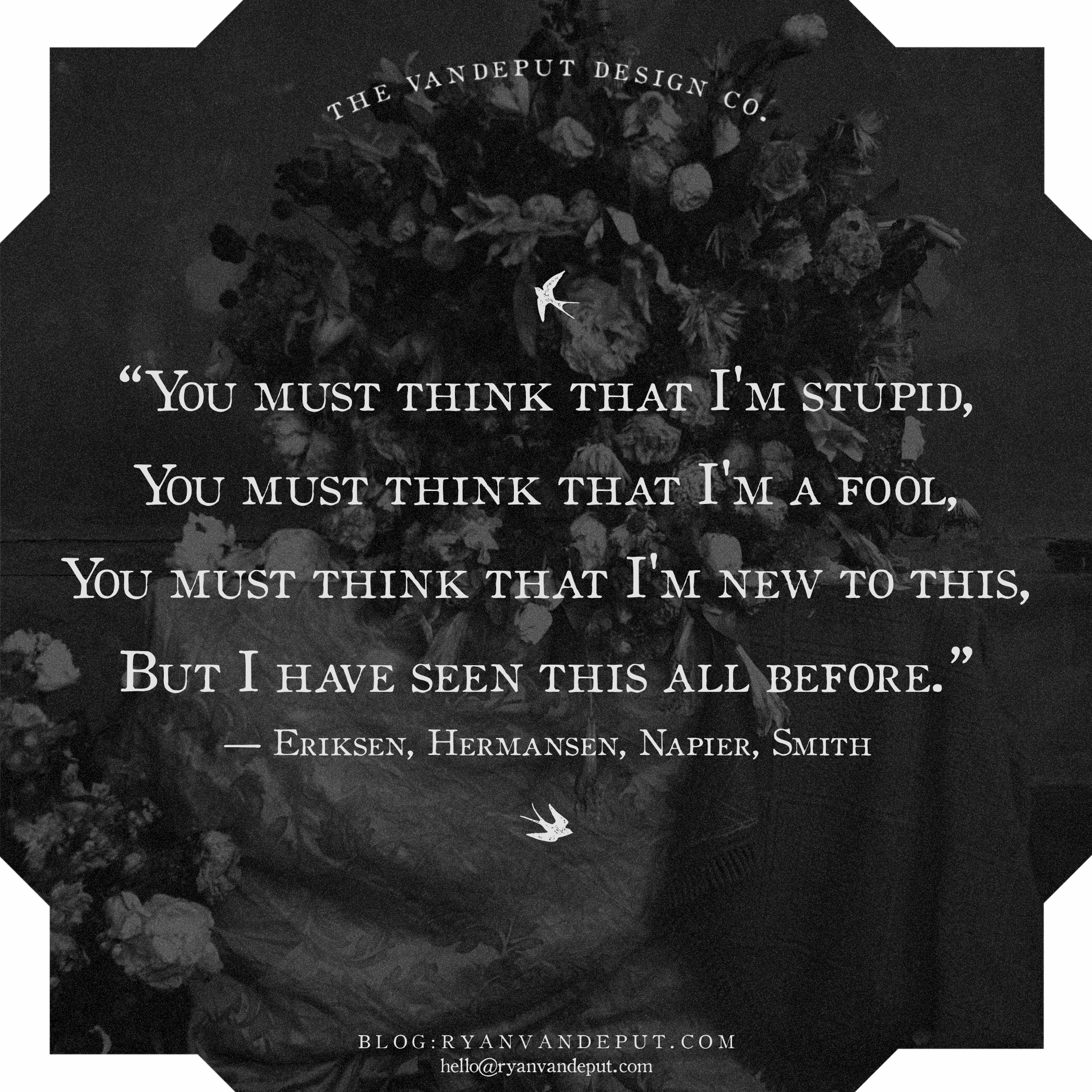 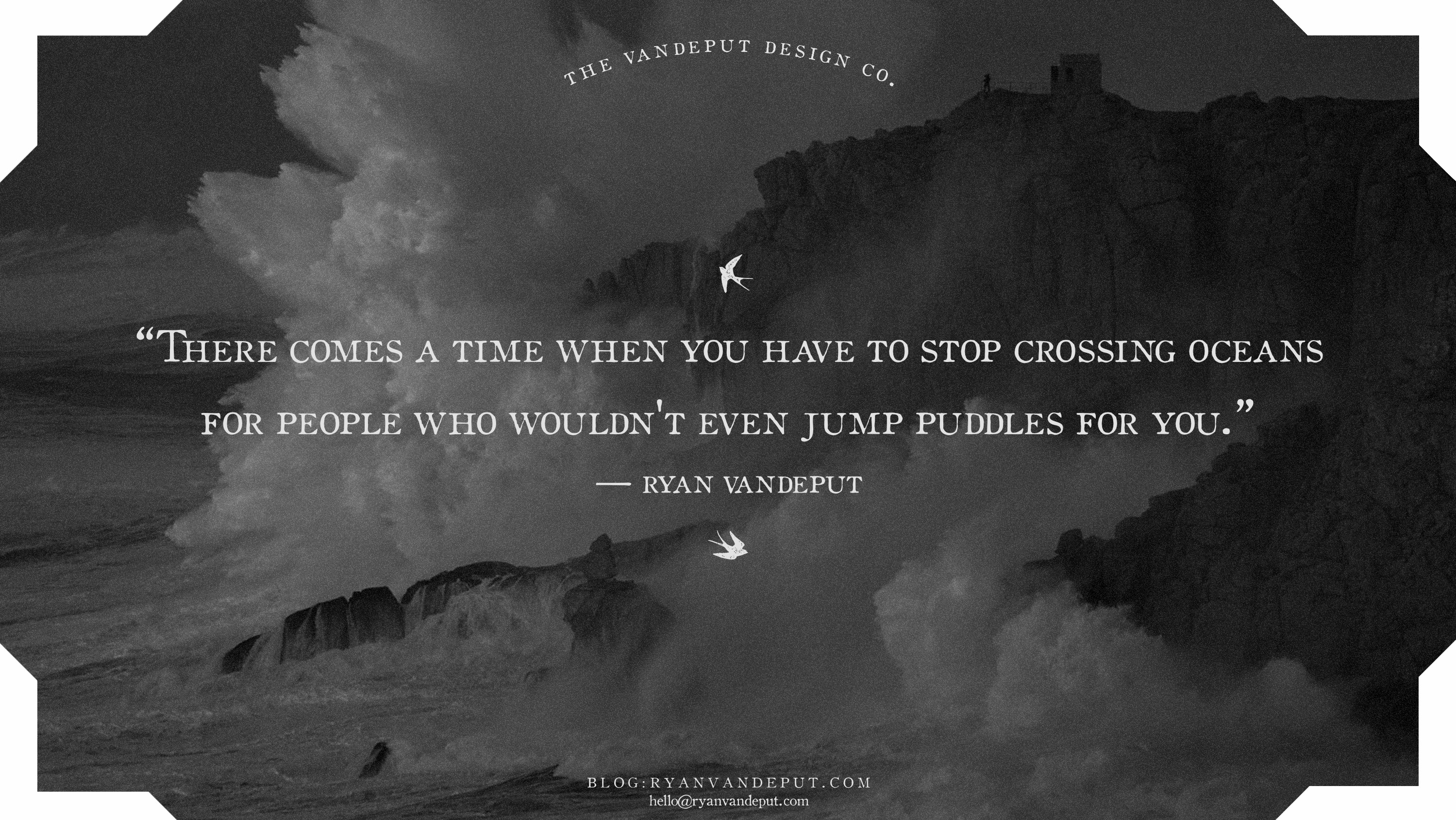 “There comes a time when you have to stop crossing oceans for people who wouldn’t even jump puddles for you.”

A most heartfelt letter written, but never sent. The tender letter from Thomas to his lover Michael, written in around 1957. Taken from the brilliant ‘Man In An Orange Shirt’, this is undoubtedly one of the most beautiful yet tragic love stories I’ve ever seen on TV and encapsulates an era of forbidden love. A love that dare not speak (or write) it’s name for fear of imprisonment. It would be another decade before the law on prohibiting homosexual relationships would be repealed, at least in the United Kingdom.

“The love I feel for you runs through me like grain through wood.”

Think about that for a minute.

If you haven’t seen the BBC adaptation of Man In An Orange Shirt, it’s available on BBC iPlayer for the next couple of weeks. I'm at work. Nobody knows I'm writing to you here. They think I’m drafting a long and stupefying memorandum about incremental shifts in the price of Welsh coal since the end of the war for the ladies in the typing pool to type up later.

You refuse my visits so you're probably tearing up my letters too but there's nothing else I can do but keep trying. It's beyond my control, do you see?

All those months ago, when I had nothing to lose really, I wrote to you in my head but was too cowardly to set more than lies upon paper. And now I find I no longer care. The love I feel for you runs through me like grain through wood. I love you, Thomas. Your face, your voice, your touch, enter my mind at the least opportune moments and I find I have no power to withstand them. No desire to.

I want us to be together as we were in the cottage. Only for ever, not just a weekend. I want it to go on so long that it feels normal. I think of you constantly. Your face, your breath on my neck at night. I want to do all the ordinary, un-bedroomy things we never got around to doing. Making toast. Raking leaves. Sitting in silence.

I love you, Thomas.
I’ve always loved you.
I see that now.
Tell me I'm not too late.

Everything in this image has been created from scratch by The Vandeput Design Co. and is copyright…

© 2017, Ryan Vandeput. Without exception, you may not use this image for any purpose in whole or part without licence from The Vandeput Design Co. Email ryan@ryanvandeput.com to request permissions. 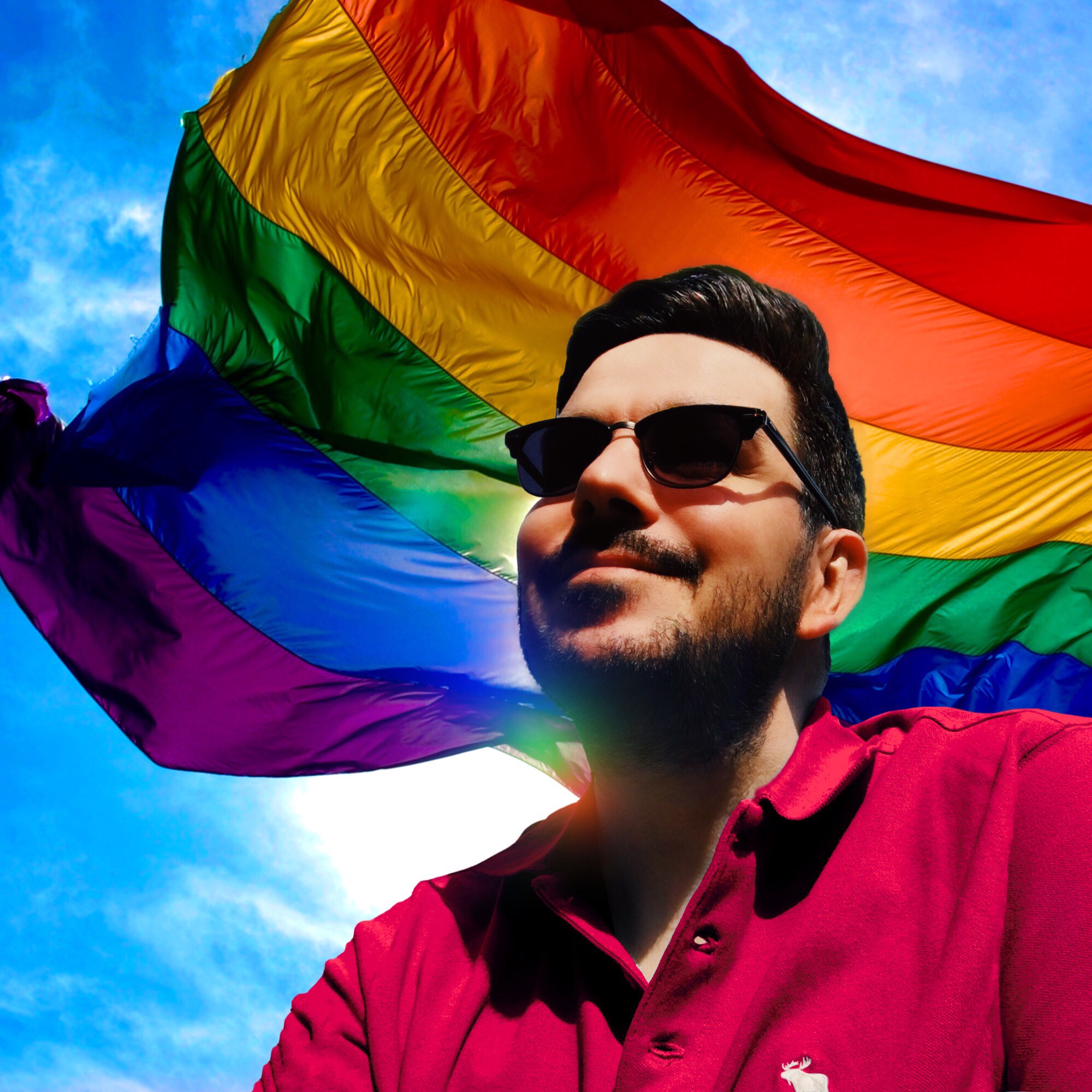 This year marks the 50th anniversary since simply being gay was no longer a crime.

In 1967, changes in the law in the UK meant that homosexuality was at last decriminalised. In fact, it was what happened at the Stonewall uprising over in the United States that heralded in a new dawn for gay rights. Indeed, the very first Pride march took place shortly after these riots and have evolved into what we now recognise as annual gay pride. It surprises me all the time that so many people from the LGBT community have no idea of origin of pride. It’s not just a big gay knees-up. Yes, it’s great to celebrate the achievements of those before us, but we must never forget that there is still much to do. Social attitudes have changed, but more could be done. Government policy has moved forward, but not enough. Laws have been made or amendmended, but not where total equality is possible. Religious stances are evolving for the better, but at a ridiculously slow pace. In short, there is still much to be achieved, and while most see Pride as a great time to party, let us not forget why pride came about, and why we now have our freedom to love whoever we choose. Let us remember that there is still a need for activism, to better the lives of LGBT people everywhere, at home and abroad.

“Let us remember that there is still a need for activism, to better the lives of LGBT people everywhere…”

We also need to look within ourselves. The﻿ once safe inclusivity of the community is being lost. We are quickly forgetting that it was a need for activism, because of persecution from other societal or religious groups, that brought us together as a movement in the first place. It wasn't being in cliques and ‘type categories’ that segregate us and push us apart. Much of the non-LGBTQ community is full of its very own negative stereotypes, abuse, slurs and hate towards us, without our own community adding to it – and we do. We need to remember what is important. An idealistic viewpoint is that we need to love and respect each other all over again.

For the most part, we’re doing great, but as my teachers often said, we “could do better.” 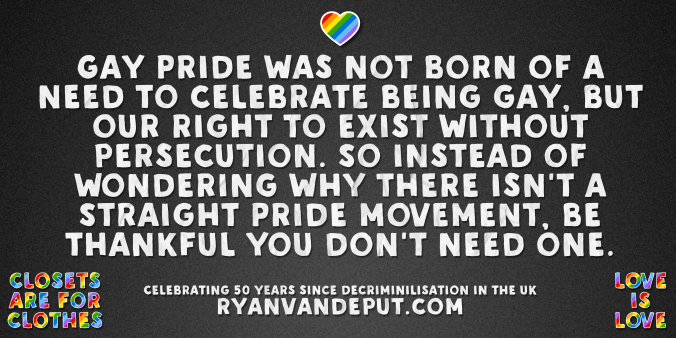 If you’re interested in watching the incredible documentary on the Stonewall riots, you can watch Stonewall Uprising here:

(If you’re outside the USA, find a good VPN client. I recommend BetterNet, which is available free on AppStores and online.)

There are now 4 brand-new videos on my YouTube channel – Titus Andromedon at his most fabulous, taken from the Netflix Original Series Unbreakable Kimmy Schmidt! Click the respective image to watch the 4 new edits, including the main street sequence, the extended cut and the ultimate cut, which features glorious tributes to Beyoncé’s ‘Hold Up’, ‘Sorry’ and ‘All Night’ plus extended scenes. Production: The Vandeput Design Co. 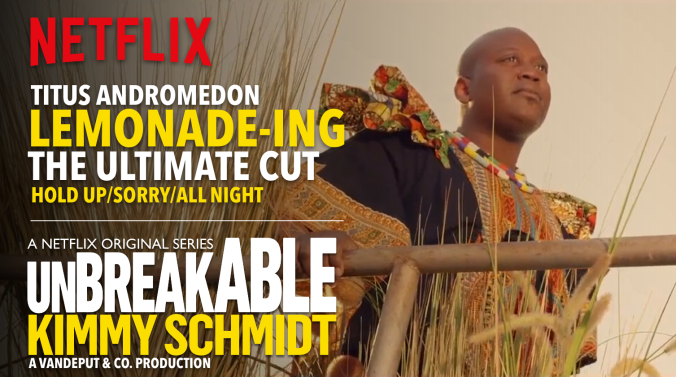 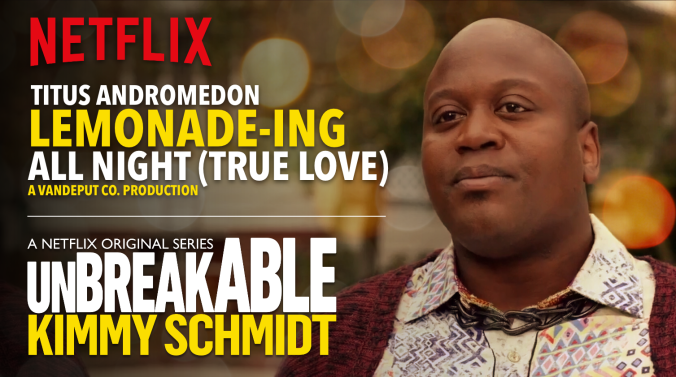 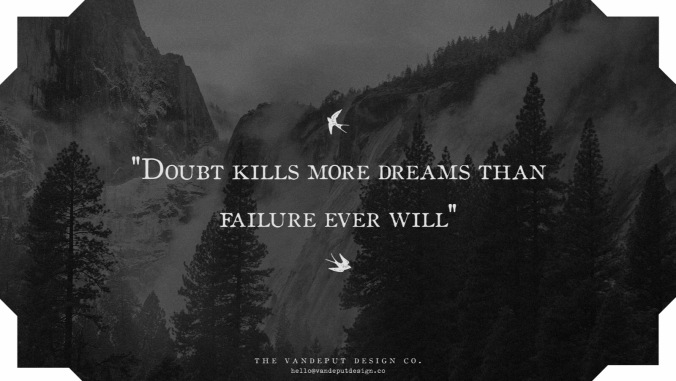 “Doubt kills more dreams than failure ever will”

More by the author